At the age of twenty-three, Michelangelo was commissioned by a French cardinal to create the Pieta for St. Peter’s Basilica in the Vatican as a tomb monument. He traveled to the marble quarries at Carrara in central Italy to select the block from which to make this large work. The choice of the stone was important because he envisioned the statue as already existing within the marble, needing only to be “set free” from it. It was sculpted from 1498-1500 and established Michelangelo instantly as the greatest sculptor of his time. The word Pieta means pity from the Greek word for “compassion” or “pity” and refers not, as often presumed to this specific work (Michelangelo actually did two other Pietas later in life, both of them unfinished) but to a traditional type of devotional image. The theme of Mary cradling the dead body of Christ in her lap was all but unknown in Italy before Michelangelo made it famous in this statue, but it was a staple in the repertoire of French and German sculptors and painters. Michelangelo, however, rendered the northern theme in a way never before attempted or accomplished.
Georgio Vasari, The great art historian wrote:

“It would be impossible for any craftsman or sculptor, no matter how brilliant, ever to surpass the grace or design of this work, or try to cut and polish the marble with the skill that Michelangelo displayed. It is certainly a miracle that a formless block of stone could ever have reduced to perfection that nature is scarcely able to create in the flesh. Michelangelo put in to this work so much love and effort (something that he never did again), that he left his name written across the sash over Our Lady’s breast.” 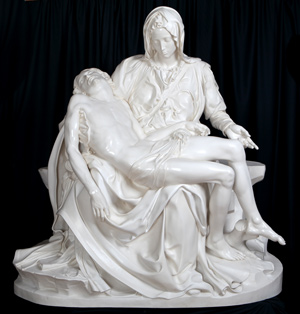